Could a Brain-Computer interface help detect the early signs of dementia and improve memory? 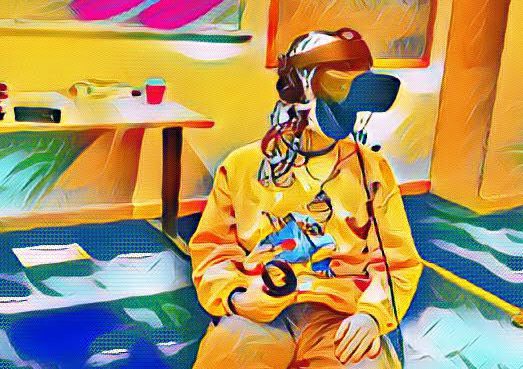 EIRA are supporting UEA academics to work with Orbital Innovations in exploring therapeutic virtual reality (VR) as a way to identify risk and potentially alleviate early memory loss, which could be an indicator of dementia.

Dementia is one of the largest global health and social crises of the 21st century, currently affecting over 850,000 people across the UK with an estimated annual cost of over £26 billion in the UK alone (Alzheimer’s Society, 2019). These figures are expected to nearly triple in the next three decades. Given the lack of effective treatments in those with a clinical diagnosis of dementia, mainly Alzheimer’s disease (AD), the early detection of dementia is becoming an increasingly important goal to help mitigate dramatic increases in its prevalence.

Tailoring of diagnosis with a potential cognitive intervention in people with early memory impairment is practically unheard of, with most people either receiving no diagnosis at all, or a diagnosis of mild cognitive impairment (MCI) followed by little further support. There is a compelling need to adopt a precision medicine approach to both the diagnosis and potential interventions for early changes in cognition.

The R&D project proposal put forward by Orbital Innovations and the academic team from UEA addresses this gap by re-purposing existing technologies such as electroencephalography (EEG) to detect changes in brain characteristics that could indicate the early signs of dementia. By detecting these changes at an early stage, further support and cognitive training interventions can then be tailored to the individual.

The VR brain-computer interface being developed for this project will also be used within a separate study being conducted by the academic team at the UEA. This study will investigate the use of this innovative technology for the treatment of chronic pain.

A key objective of this R&D proposal is to develop a platform that allows for the detection and manipulation of brain signals through attention-based neuro-feedback within an immersive VR environment, with the aim to accelerate therapeutic benefits, particularly for early intervention in dementia and other conditions like chronic pain.

Dr Saber Sami obtained his PhD in Biomedical Science and Engineering from the Centre for Sensory-Motor Interaction, Aalborg University, Denmark. Subsequently, he has held research appointments at Aalborg University (Denmark), the University of Birmingham (UK) and the University of Cambridge (UK). Dr. Sami joined UEA in 2017 and holds the position of Senior Lecturer in Dementia Research. His line of investigation is inherently multi-disciplinary, utilising multi-modal imaging, behavioural methods and computational modelling to better understand cortical reorganization in chronic conditions. His more recent work in the Department of Clinical Neurosciences at the University of Cambridge (UK) has been the study of the healthy ageing population and chronic conditions including the effects of dementia on the brain.

“Our collaboration with Orbital Innovations will lead to a truly novel cognitive training tool that is entertaining yet cognitively challenging with a wide range of potential applications to mental health, dementia as well as chronic pain.” – Dr Saber Sami

Dr. Jordan Tsigarides is an Academic Clinical Fellow in Rheumatology based at the Norfolk and Norwich University Hospital (NNUH) and Norwich Medical School. He is the VR lead for the NNUH and has been responsible for the development of multiple educational programmes utilising immersive technologies.

Jordan is currently the principal investigator for funded primary research projects investigating the use of VR for Fibromyalgia and chronic pain post-total knee replacement. He founded the MSK Therapeutic VR Lab at the University of East Anglia (UEA) and is actively co-developing VR interventions alongside industry partners. His projects are patient-focused and aim to develop meaningful, acceptable interventions alongside individuals with chronic pain. He is also working with neuroscientist colleagues at the UEA using EEG to investigate the potential mechanisms of VR analgesia and the utility of Brain-Computer Interfaces (BCIs) in chronic pain.

Jordan attended the ECR Residential course EIRA hosted in 2019, and we are delighted to be supporting his research in this critical area.

“Through this EIRA funded project, we are actively developing an intervention which harnesses the immersive nature of virtual reality whilst also leveraging the power of the brain to ‘hijack’ neural networks and attention.” – Dr Jordan Tsigarides

One very futuristic aspect to the study is that the team will use a ‘Brain-Computer Interface’ where people will be taught to control elements of a VR game using only the power of their mind. The team will work with multiple cognitive training games designed to manipulate attention and challenge memory. The games will include challenging and interactive tasks integrated within immersive virtual environments.

Once integrated, feasibility tests will be conducted on participants without any clinically detectable memory impairments. The developed neuro-feedback system will harness the power of attention to manipulate brain signals and investigate impacts on working memory.

“Although controlling things with your mind may sound futuristic, Brain-Computer Interfaces are achievable right now and have the potential to bring real benefits to people.”

Peter Brady, CEO of Orbital Innovations, said: “Orbital Innovations has been working towards the development of a novel neuro-feedback controlled virtual reality technology. This innovative project collaboration with UEA will be breaking new ground in fully exploring the exciting opportunities this technology will offer patients in the future.”

EIRA has supported issues relating to healthy ageing through a one-day conference in 2019 aimed at showcasing the research across our partner institutions. The aim of the event was to explore how EIRA’s artificial intelligence, biotechnology and digital creative themes can be utilised in finding effective solutions for age-related issues. You can read more on this event here. We’re now very excited to see how this project progresses and will keep you updated with further developments.