The Mystery of the Raddlesham Mumps Immersive VR Experience

Author of epic gothic poem 'The Mystery of the Raddlesham Mumps', Murray Lachlan Young, and Creative Producer, Matt Linley wanted to explore the commerciality and audience experience of multi-platform media based on the poem. Would a VR prequel of the poem increase audience engagement, understanding of and enjoyment between the different texts? 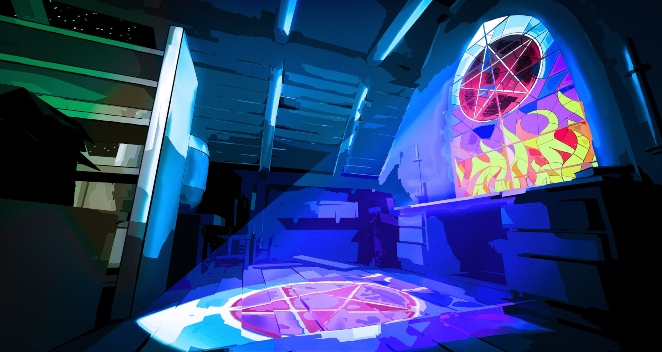 The over-arching aim of the project was to pilot a new cross-platform model for audiences that used a pre- and post-show game utilising VR technology to enhance and extend the traditional live show experience. This needed to be appropriate, accessible and engaging for people from the age of 7+ to maximise the commercial opportunity of utilising this technology.

Two versions of an immersive prequel experience were created (Occulus Go and Android) and research undertaken in to the effect this multi-platform story telling had on audiences.  Results from the research will inform which platforms the creative team use in future works.

The project aimed to explore how the VR experience could increase ticket sales by offering something unique to audiences. It was anticipated that audiences would ‘champion’ the experience overall and sell the show to their networks, enthusing younger audiences with poetry and spoken word performances.

The project also wanted to explore how to successfully introduce elements of VR into a live performance of a family show, and understand the extent to which the VR element enhanced the experience of the live audience, with a view to informing the development of future cross-platform projects.

The project engaged expertise from academics based at the University of Essex. Dr Liam Jarvis (Literature Film and Theatre Studies department) acted as a creative mentor on the project. Dr Paul Hibbard and Dr Loes Vandame (Department of Psychology) were responsible for the research. Additional VR development expertise was also brought in from VR specialist company MBD.

Pinpointing exactly which tech could be used and what format this would take was essential to the success of the project. The businesses, academics and artists involved understood that the VR experience had to be accessible and augment rather than restrict the performance. Time was spent honing the feedback questionnaires that were given out to audience members in order to maximise the opportunity for collecting quality data and refining results.

Audience members were given the opportunity to explore the tech options available through the tablet game and VR headsets before and after the performance, which generated a lot of excitement and interest. Questionnaires were given out at the shows, which generated a higher response rate than the more detailed survey that was sent out afterwards.

As the project was co-funded by Arts Council England, the project supported the creation of a piece of theatre and a digital, immersive and accessible prequel in two formats that could be enjoyed by a wide range of people. Feedback from audience members shows that Raddlesham Mumps is a high quality work for children and families, which includes a rich use of language and poetry within a theatrical story. The research report that was written by academics in the Department of Psychology explores the opportunities that are presented by utilising the VR technology to enhance the live performance.

“Beyond the pure fun of collaborating on such an interesting project with such keen, professional and committed people – was the way the VR element opened up areas of the story and production concept that had not been thought of before the interaction with MBD and the University of Essex team. This played brilliantly with the family audience, gave a highly contemporary edge to the production and brought the action into non-theatrical spaces (in the theatres) offering a prologue and epilogue to audiences and a different and highly complementary angle on the show.” – Murray Lachlan Young

The creation of a digital teaser / interactive game was a pioneering achievement and the relationship developed with the University of Essex was hugely beneficial, opening up a range of unexpected possibilities for future collaboration.

“Our partnership with University of Essex has been very exciting and very wide reaching. It’s certainly excited us all about future partnerships/ potential and very much demystified working with a University as an active partner.” – Matthew Linley, Creative Producer

Outcomes during the project include:

The project itself has yielded considerable learning for the creative team around storytelling in VR, and how VR development can be embedded within a creative process. The initial project was so successful that a second tour is currently being delivered which also received Arts Council funding, and a third is being planned for Spring 2020. These subsequent tours and increased media coverage will be vital in comparing and analysing data on ticket sales and commercial prospects moving forwards.

In addition, a sequel to Raddlesham Mumps is going to be developed in a period of R&D in the near future. The Psychology department at the University of Essex is continuing the research over the second tour to generate a greater level of data.

“For a University, participating in collaborative projects with industry gives our research real world application and impact. Carrying out research into the audience experience of VR, which includes a family setting, really excited us, as we have explored how this affects the dynamic and enhances the overall experience of the artistic piece. The other- worldly nature of Raddlesham Mumps lends itself to a VR representation and the end result heightens user’s immersion into the tale.” – Emma Wakeling, Knowledge Exchange Manager, University of Essex

Many follow on ideas have been discussed between the creative team and the Psychology Department around creative VR projects for children, tackling head on the question of safety.  This is linked to what hardware can be used and how this will affect a family experience.

The project has established a longer-term partnership between the business, artists and academics involved and it is likely that further funding will be applied for.

The project has also opened out possible new opportunities for the creative team, including the development of a VR experience for Colchester Castle and orchestrations of the score.